Since 31st December 2020 and the exit of the UK from the EU, there have been many changes in the way in which UK citizens are permitted to travel internationally.

Because of these changes, the number of UK requests to obtain residency in Spain and overseas has risen dramatically.

With this in mind and with an initial focus on the capital of the UK, London, we look at how this has affected the ability to apply for residency in Spain through the Spanish consulate of London.

In the first instance the biggest change has been that almost no-one is receiving an email reply from the Spanish consulate in London. Moreover, telephone calls are answered automatically and they give instruction to contact through their website, which guides you to send an email.

Our legal offices represent many clients in the areas which are governed by the Spanish consulate of London and because our clients are also affected by the above, we have contacted the Spanish government in Madrid to request on how to proceed.

This communication has informed us on how to proceed and we have been given the reasons why the Spanish consulate in London is unavailable at current.

We were told;
´Due to “Brexit”, the Spanish Consulate in London has experienced an exponential increase in the number of applications for national visas (residence, studies, work). Between the months of June, July and August, the two email accounts of the visa section have received almost 12,000 emails, many of them requesting a face-to-face appointment at the Consulate. Due to the structural limitations of the building, it is only possible to grant less than 200 weekly face-to-face appointments during the two days of customer service that the visa section has been assigned since July 2021. The rest of the days of the week are reserved for the sections of nationals and civil registration, in order to be able to attend the no less numerous requests for passports, consular registrations and cancellations, registry inscriptions, safe-conduct, etc. It should be noted that prior to that date, the visa section had only granted a single day of service to the public per week, since the main effort at that time was aimed at issuing the passports that the Spanish citizens residing in this area. London demarcation needed to regularize their legal status in the UK after Brexit. These limitations have caused serious delays in the allocation of face-to-face appointments for visa applicants.

The Ministry of Foreign Affairs, European Union and Cooperation is fully aware of the problem and the project to move the London Consulate to new facilities more suited to current needs is at an advanced stage. Until the transfer takes place, some specific improvements can be made (for example, the automation of the appointment allocation system, currently in progress) but it will be very difficult to be able to substantially increase the weekly number of face-to-face appointments granted.´

Regarding the consulates in Manchester and Edinburgh, for the areas they govern as shown in the attached map, the consulates are working perfectly offering all types of appointments as they were previously. 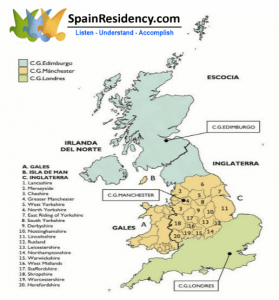 Would you like to obtain residency in Spain?
Please send us a message below and we will legally advise on how you can proceed.