Spain immigration authorities were rejecting applications for long term residencies if the applicant is out of the country for more than 10 months in 5 years. This little-known rule had been largely ignored by provincial immigration offices until recently, when they have started to implement it extensively for residents sourcing Spain residency. 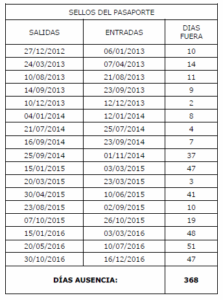 The chart above was extracted from a letter received by an applicant who was rejected a petition for a long-term Spain residency card, which is applied after 5 years of temporary residency. The card holder had been away for more than 300 days in 5 years. The resolution is not likely to be appealed as there are no grounds to appeal. The applicant has now applied for another 2-year temporary residency card and is working towards Spanish Citizenship.